Neutering (spaying / castrating) your cat or dog is the single most important decision you can make to protect your own pet and to improve the welfare of the wider cat and dog population.

The Celia Hammond Animal Trust runs low cost neuter clinics for cats and dogs whose owners are on benefit or low income - visit our Contact Us page for your nearest CHAT clinic.

Why do we want to neuter (spay) your female cat?

QUITE SIMPLY THERE IS A CAT OVERPOPULATION CRISIS IN THE U.K ......

The problem is that there are too many cats being born for the homes available and this means rescue centres are full of unwanted 'surplus' cats, abandoned cats and strays on the streets.  Thousands of unwanted cats end up being euthanased because noone wants them.

Cats are prolific breeders and can become pregnant at just 4 months old!

Cats usually have 2 or even 3 litters per year. A typical litter is 2-6 kittens.  From four months old, the kittens will also begin to breed.

Some may end up homeless and breed on the streets forming feral colonies in towns and cities.

IF A FEMALE CAT MATES EVERY TIME SHE COMES INTO SEASON AND ALL HER KITTENS SURVIVE AND BREED, THERE COULD BE UP TO 21,000 EXTRA CATS IN JUST SEVEN YEARS!

Kittens maybe cute but the reality of letting your cat have a litter is not so rosy as a recent poll of cat owners discovered .... 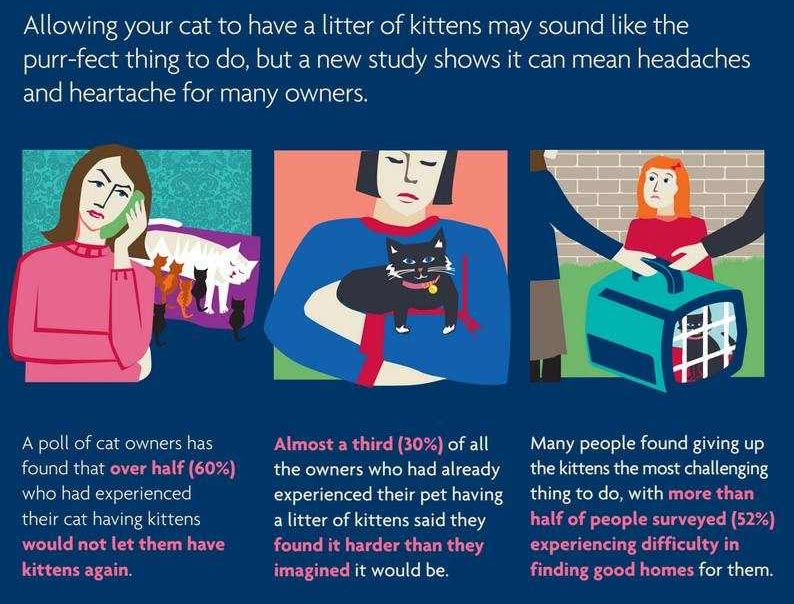 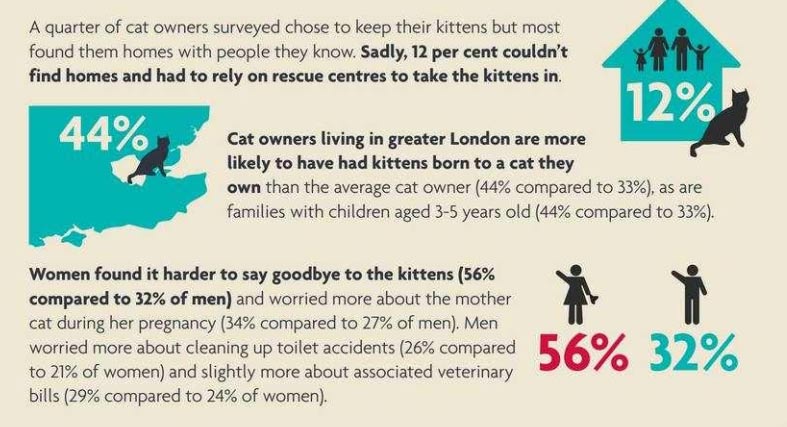 SO WHAT ARE THE BENEFITS OF NEUTERING (SPAYING) FOR YOUR CAT? 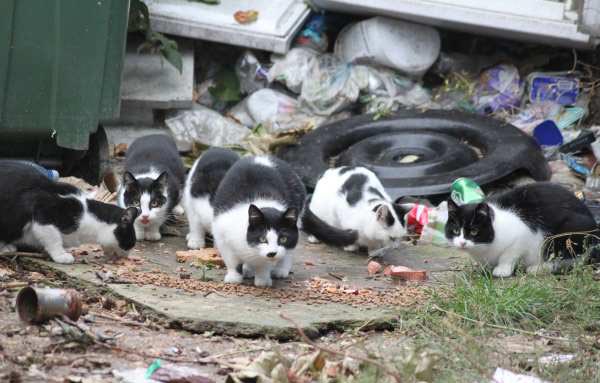 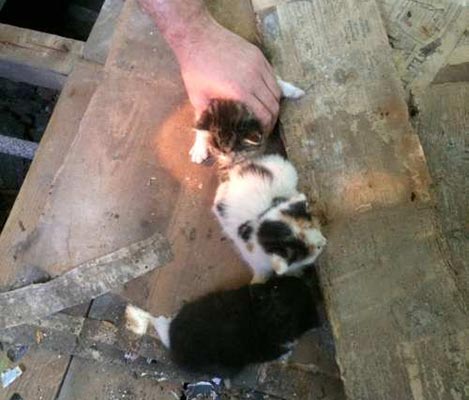 PHOTO: 1:  Just one of the many colonies of stray cats and kittens living on the street in London.  2: Kittens born to a stray mother rescued from a derelict shop.

When should I neuter (spay) my female cat?

Female cats should be neutered by 4 months old, but can be neutered at any age afterwards. There is no benefit to your cat in letting her have a litter before she is spayed. If your cat has already had kittens, she should be neutered promptly when her kittens are 6 weeks old or she will become pregnant again. Neutering her will not affect her milk supply. 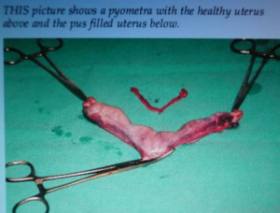 PHOTO : The photo shows a normal (top), healthy uterus and below a pyometra - a uterus filled with pus.

What about 'indoor only' female cats?

It is important that female cats that are kept permanently indoors are also neutered. This is because they will constantly come into season, which is very frustrating for them, and for you! Unneutered female indoor cats are at risk from various health problems including cystic ovaries and pyometra - a potentially fatal infection of the uterus. Undiagnosed, the uterus fills with pus, and then bursts causing peritonitis and death.

PHOTO : The photo above shows a normal, healthy uterus and below a pyometra - a uterus filled with pus.

Why do we want to neuter (castrate) your male cat? 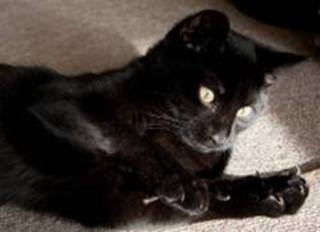 Your male cat may not be presenting you with his offspring to find homes for but there are some very good reasons why neutering (castrating him) will protect him from many dangers and give him the best chance of a long and happy life.

To keep your pet from getting lost.

When mature, your unneutered male cat will begin to roam further afield in his search for female cats. As he travels further, he will be at risk when crossing busy roads and from fight injuries acquired during territorial battles with other unneutered male cats. Many male cats roam just a bit too far and cannot find their way home. They then become one of the UK's 2,500,000 strays that struggle to survive on the streets. A large proportion of cats that are reported to, and taken to, rescue centres are tame unneutered males once owned pets. 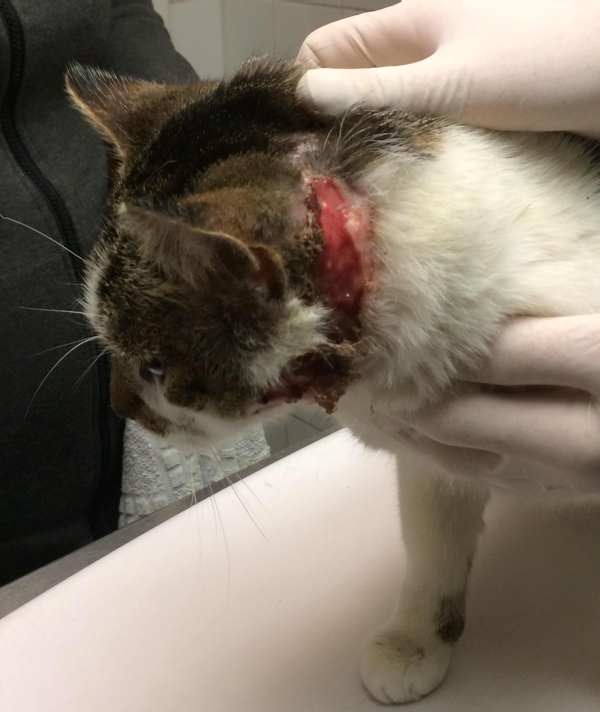 Unneutered male cats are very territorial and aggressive towards other cats. They will be inflicting terrible injuries on other cats, neutered or not! Male cats that have already lost their way home will not have a caring owner to take them to the vet to be treated. Many once loved pets end up in a terrible state with life-threatening injuries.    PHOTO : A stray unneutered male cat suffered for weeks with a very nasty infected abscess wound that required weeks of veterinary treatment to enable this wound to heal.

Fighting unneutered male cats are most at risk of contracting FIV. The virus is transmitted between cats through deep bites incurred during fights. FIV is widespread amongst unneutered male cats and can eventually develop into full-blown disease. There is no vaccine against FIV. Neutered cats are much less aggressive to each other, thus by neutering your male cat, he is much less likely to be involved in fights and therefore less likely to contract FIV.

Unneutered male cats spray very strong foul-smelling urine to mark their territory. They may spray in and around your home or your neighbours' homes. Neutering prevents this. 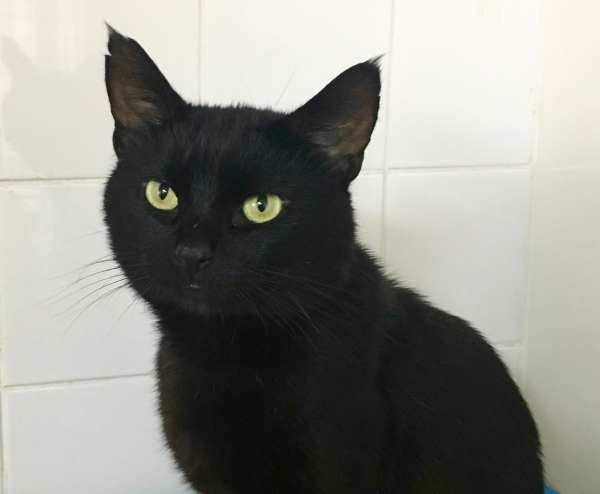 To be a good neighbour

There is an unnaturally high concentration of cats in UK towns and cities. An unneutered male cat will make himself very unpopular spraying and fighting with other cats in the area. A large proportion of reports to animal charities are from people annoyed by unneutered male cats attacking their cats and spraying inside their homes.

To be responsible pet owners

Rescue centres are full of battered, stray, unneutered male cats, some once loved pets that have roamed too far and become stray. Once neutered they soon make lovely pets again, but the numbers needing homes are so great that many are doomed to join the thousands of unwanted cats that are DESTROYED each day in the UK. If only they had been neutered they probably wouldn't have become strays in the first place. Male cats should be neutered at four months old, but can be neutered at any age. They are never too old. 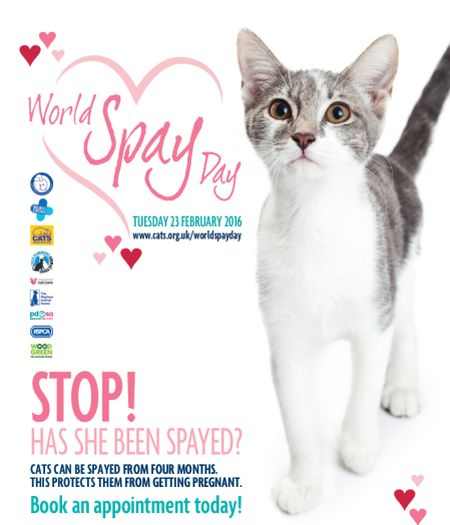 The Celia Hammond Animal Trust is a member of the  CPCG (- Cat Population Control Group) -  a coalition of 9 charities - RSPCA, Cats Protection, Blue Cross, Wood Green, Battersea, The Mayhew, PDSA, International Cat Care, and CHAT all working together to promote cat neutering as a  humane solution to the problem of there being too many cats and not enough homes available for them.

The CPCG takes part in initiatives such as promoting World Spay Day which is held in February each year.

Why do we want to neuter (spay) your female dog? 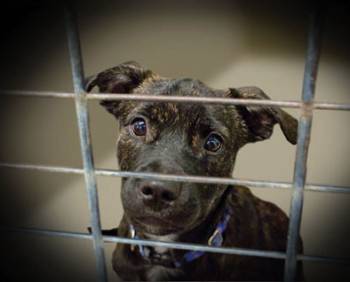 Rescue Centres all over the UK are full of unwanted mongrel and pedigree dogs and puppies. All are desperately hoping for new homes. Every day, thousands of unwanted healthy dogs and puppies are destroyed simply because there are not enough homes to go around.

OK, so you agree it is irresponsible to breed from your bitch... but why does she need to be spayed? 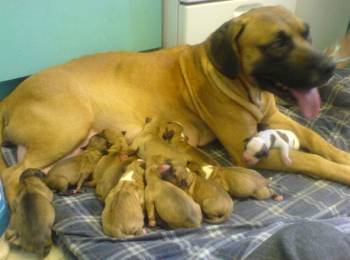 You should consider the medical reasons for having your bitch neutered: 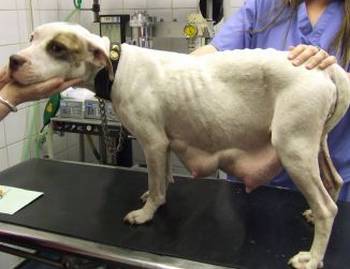 "But I've paid a lot of money for my bitch. I want her to mate so that I can sell the puppies...?"

If you let your bitch have a litter, and manage to home her puppies, you use homes that the thousands of dogs and puppies in rescue centres could have had ~ THEY MAY END UP BEING DESTROYED.

PLEASE BE A RESPONSIBLE OWNER, ARRANGE FOR YOUR PET TO BE NEUTERED (SPAYED)  NOW. BITCHES CAN BE NEUTERED AT 4-6 MONTHS OLD, OR ANY TIME AFTER. THEY ARE NEVER TOO OLD.

Why do we want to neuter (castrate) your male dog? 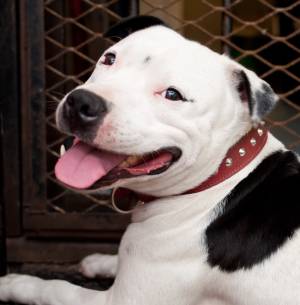 Some people think that routine castration of male dogs is unnecessary. Here are some reasons why we think neutering your dog is the best option:

There are quite simply too many dogs and puppies and not enough homes. Rescue centres and stray dog pounds all over the UK are full of unwanted mongrel and pedigree dogs and puppies, mainly Staffies and Bull breeds. All are desperately hoping for new homes - most will not get them. Don't let your dog add to the problem by siring even more puppies that nobody wants.

Your male dog can smell a bitch in heat from a very long distance away, and some dogs will do anything to reach her - including scaling tall fences or digging underneath. These dogs are liable to become lost, get into fights with other dogs or be involved in road traffic accidents as they run across busy roads.

Often, male dogs become very sexually frustrated. They may try to mount cushions, or even people's legs and scent mark by urinating around the house. Some become snappy and dominant around people. Most unneutered male dogs are aggressive toward other male dogs often becoming involved in fights during which they can sustain serious or even life threatening injuries. 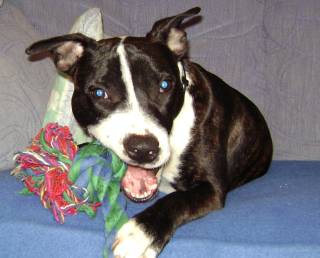 BE A RESPONSIBLE OWNER, ARRANGE FOR YOUR DOG TO BE NEUTERED NOW!

We are sometimes asked - isn't neutering interfering with nature?

By domesticating cats and dogs, humans have already interfered. By breeding cats and dogs and caring for them, we have helped ensure their breeding success and longer life. The dog and cat population can either be humanely controlled by neutering or left to nature. Nature is cruel, however, and the population will be controlled by starvation and disease since there are no natural predators of the cat or dog in the UK. The most likely scenario however would be a situation seen by many holidaymakers in some countries - starving colonies of sick animals which are killed by the authorities to contain numbers - a situation most people in this country would find intolerable.
The choice is ours - yours, actually! Please neuter your pet ~ Be part of the solution, not the problem. 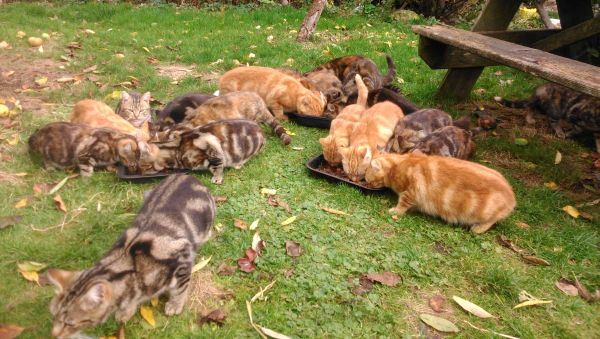 PHOTO: There were 60 cats in this one colony of cats - all descended from just one pair of cats after their owner decided against neutering them.