Cat collars can be very dangerous, the term 'collar wound' refers to the often terrible injuries that are caused when the cat gets a leg, two legs or a jaw through its collar, if not promptly freed from the collar the collar will start to cut into the flesh.

If a cat is stray and does not have an owner to remove the collar, it will continue 'sawing' into the cats flesh, the wound then becomes infected and in the summer months will attract flies and become fly blown.

We frequently rescue cats that have got one leg caught through a collar and have a deep wound under a leg which requires surgery and a relatively lengthy time to heal as it is an area where there is a lot of friction as the cat moves around.

Colin's case is the most shocking 'collar wound' cat that we have ever come across.

We debated whether this was too shocking to share with you, our supporters. It is cases like this that really hit home why our work to help stray cats is so important.

The collar was cut out under anesthetic and Colin was treated with antibiotics until the infection was under control and we were able to close the dreadful wound which encircled his whole body.

Injuries caused to cats by shootings with air guns are sadly all too common. This poor cat had been shot in the face three times with an air gun. Our vets operated to remove the pellets and he is now recovering from his terrible ordeal. 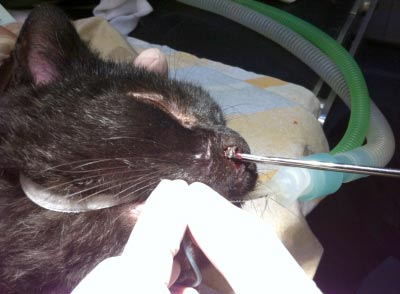